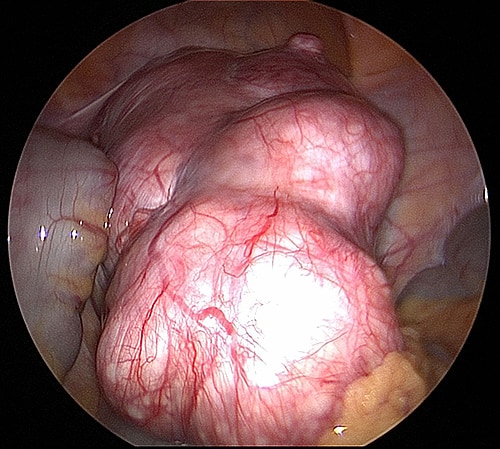 A fibroid (leiomyoma) is a common benign growth / tumour of muscle in the uterus (womb). These growths may occur on the outside (subserosal fibroid), in the body (intramural) or in the cavity (submucosal) of the uterus.

Some fibroids have an effect on the ability to fall pregnant. The effect on fertility is likely to be related to the fibroid size and position of the fibroids.

Fibroids can grow in size during pregnancy and may cause pain due to fibroid degeneration.

Fibroid position appears to influence fertility, therefore investigation must be able to exclude uterine cavity involvement by the fibroid. 3D pelvic scan can be very useful in diagnosis than the 2D normal transvaginal ultrasound (Scan). MRI or hysteroscopy are preferred.

Effects of fibroids on fertility and pregnancy outcomes:

Subserous fibroids do not appear to have a significant effect on fertility outcomes.

Intramural fibroids may be associated with reduced fertility and an increased miscarriage rate.

SM fibroids are associated with reduced fertility and an increased miscarriage rate. Hysteroscopic myomectomy for SM fibroids is likely to improve fertility outcomes.

Indications for myomectomy in infertile women

Many women do conceive naturally after the fibroid removal surgery.

Uterine artery embolisation (UAE),and other mode of treatments are not indicated if women wants to conceive.

Myomectomy is the accepted surgical management for fibroids that are felt to influence fertility.This may be via a laparotomy, laparoscopic or hysteroscopic approach depending on the size andlocation of the fibroid.

Medical management of fibroids delays efforts to conceive and is not recommended for themanagement of infertility associated with fibroids.

However, short term use of a GnRH analogue canbe useful for pre-operative correction of anaemia or short term reduction in fibroid volume.

The useof ulipristal acetate in infertile women with fibroids is not recommended due to the risk ofsignificant adverse side effects.