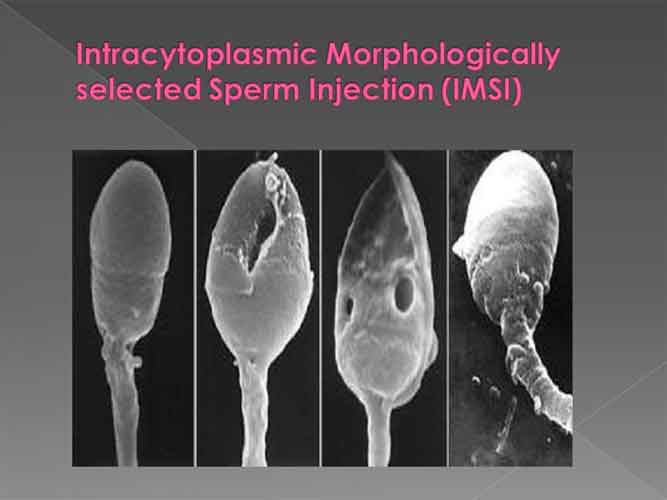 IMSI is an advanced version of ICSI having a magnification power of 16 times higher compared to ICSI.In ICSI, before sperm microinjection the sperms are observed under the microscope of x500 time’s magnification. But in IMSI, the sperm is being examined under high power of x6000 times using an inverted microscope before microinjection.

IMSI allows the embryologist to see the spermatozoa’s detailed structure, thereby detecting potential abnormalities in the head, middle-piece, and tail of the sperm. This technique thus enables our embryologists to select healthier looking sperms which might result in improved embryo quality, thereby increase the pregnancy rates and reduce miscarriage rates.

How is IMSI done?

After collecting the semen sample, it is first treated with sperm wash media to remove any debris.An embryologist examines the sperms under a microscope for choosing a suitable sperm for injecting in the egg.

IMSI helps to determine the sperm morphology through a high magnification of around 6000 times. The embryologist only chooses morphologically normal sperm for injecting in the egg.

Why perform an IMSI?

The significant feature of IMSI is that it selects the sperm with great precision. Minor morphological sperm abnormalities can be detected, which are usually missed with ICSI. In ICSI, the sperms may look healthy, but they may not have fertilization potential.

Who is suitable for an IMSI treatment?

Mostly, experts recommend the IMSI treatment in men with