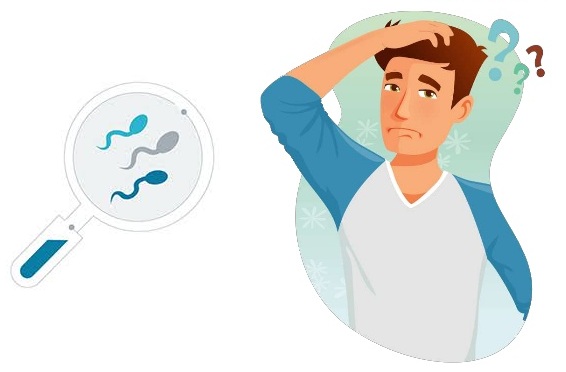 Male infertility can be caused by various factors such as hormone disorders, illness, injury to reproductive organs, Blockage, or sexual dysfunction. These factors can temporarily or permanently affect sperm and prevent conception. Some disorders become more difficult to treat the longer they persist without infertility treatment.

Is the failure of testes to descend; can impair spermatogenesis (production of sperm).

Cystic FibrosisMay cause absence of the seminal tract such as the epididymis, vas deferens, or seminal vesicles.

Drugs:Certain drugs used to treat hypertension, arthritis, and digestive disease, as well as chemotherapy drugs are associated with sperm production problems and infertility.

Ductal Obstruction:This is most often caused by a vasectomy, but may also be due to repeated infection, inflammation, or a developmental defect that prohibits sperm transport.

Hormone Dysfunction:Caused a by disorder in the hypothalamic-pituitary-gonadal axis.

Prostatitis:Inflammatory infections of the prostate (prostatitis), epididymis (epididymitis) and testicles (orchitis), can cause irreversible infertility if they occur before puberty.

Retrograde Ejaculation:This occurs when impairment of the muscles or nerves of the bladder neck prevent it from closing during ejaculation, allowing semen to flow backwards into the bladder. It may result from bladder surgery, a developmental defect in the urethra or bladder, or a disease that affects the nervous system, including diabetes. Diminished or "dry" ejaculation and cloudy urine after ejaculation may be signs of this condition.

Sexually Transmitted Infections:Also commonly referred to as STDs; can cause obstruction, infection, and scarring.

Sickle Cell Anemia:May cause hypogonadism; a decreased functionality of the testicles.

Spinal Cord Injury:The majority of these injuries occur in healthy men of reproductive age producing sexual and reproductive difficulties. Many factors may predispose spinal cord injured men to infertility. Ejaculatory dysfunction, abnormalities of sperm production, chronic infections and blockage of sperm within the male reproductive tract are all potential factors. Besides being a male fertility issue, spinal cord injuries could also cause some form of male sexual dysfunction.

Systemic Disease:Systemic disease can cause a persistent high fever, infection, kidney disease or a metabolic disorder which can impair spermatogenesis (the process of producing sperm).

Testicular Trauma:An injury, surgery, or infection can cause testicular trauma and trigger an immune response in the testes that may damage sperm. Though the effects are not fully understood, antibodies can impair a sperm cell's ability to swim through cervical mucus or to penetrate a female egg.

Varicocele:The pampiniform plexus of veins around the testicle may at some time become tortuous and dilated much like a varicose vein of the leg.

Heat can have a detrimental effect on normal sperm production. It is for this reason that nature has placed the testicles outside the body in the scrotum rather than in the abdomen like the ovaries. Soaking in a Jacuzzi can destroy semen in a man’s body.In extreme cases, prolonged exposure to heat and long-distance cycling can also affect a man’s fertility and leave him with a low sperm count.

Obese men can also become sterile because the large percentage of adipose tissue can cause hormonal changes such as an increase level of estradiol. This send signals to the testicle to curtail sperm production.

Men whose job involves long hours of sitting, e.g. long-distance truck drivers may have infertility due to the increased heat to the genital area.

Smoking cigarettes every day has been shown to reduce both the sperm count and sperm motility.

Excessive alcohol intake can lead to infertility. Alcohol can lower the production of sperm and of the male hormone testosterone.

There is increasing evidence that high dose of substance abuse (marijuana) can cause significant decreases in sperm counts.

Use of anabolic steroids such as testosterone can send signals to the testicles to stop sperm production.

If male infertility factor is present, it is almost always defined by the finding of an abnormal semen analysis, although other male factors may play a role even when the semen analysis is normal.A comprehensive sperm analysis is always the first step when evaluating a male for potential infertility.

What is a normal sperm count and motility?

Semen Analysis: Semen analysis is the mainstay and only initial investigation done for men. Though an important test, semen analysis is not always a measure of the fertility potential in the male. The sperm count can be highly variable is even in a normal fertile man.

Scrotal Ultrasound: to confirm A concentration of 15 million sperm per ml

Sperm DNA Fragmentation: There are times when the sperm analysis is normal but the sperm has DNA issues. A DNA fragmentation test can test for the percentage of DNA that has been fractionated. If greater than 30%, it can translate to poor embryo fertilization and if embryos are formed, they many result in miscarriages.

TMSC (Total Motile Sperm Count): A slight abnormality in sperm count may be compensated for by better motility or an increase in volume.When we multiply volume by concentration by percent motility, a total motile sperm count is generated. This is a helpful number as it presents the payload of sperm that can swim to the egg to fertilize it. A total motile sperm count of greater than 20 million is preferred.

What problems may be identified during external genital examination

Treatment options for men with low sperm count vary depending on the cause of the condition.